Jessica Taylor-Bearman was born in March 1991, at Maidstone Hospital in England. She grew up in Rochester and Canterbury, Kent, where she attended Rochester Grammar School for Girls.
​
At the age of 15, she became acutely unwell with an illness called Myalgic Encephalomyletis (M.E). She was continuously hospitalised from 2006-2010, suffering with the most severe form of the condition. This included her being bedridden, unable to move, speak, eat and more. She began to write in her mind, and when finally able to speak again, she began to write through her audio diary ‘Bug’. Jessica always wanted to be an author and is about to release her first book 'A Girl Behind Dark Glasses'.

Book Description: From a darkened world, bound by four walls, a young lady tells the tale of her battle against the M.E Monster. The severest form of Myalgic encephalomyelitis (M.E) went to war with her when she was just fourteen. From beneath her dark glasses, she gets a glimpse of a world far different from the one she remembers.
Through courage and unerring hope, she begins to overcome this devastating condition, resolving to beat the M.E Monster and take her life back.
But how? It's never been done before ...
My name is Jessica.
Welcome to my world.

I have been incredibly blessed to be able to contact Jessica and am incredibly moved by her story and am truly inspired by the sheer courage and determination that she has shown throughout her life. I am hoping to work with her in the future through our creative projects and to continue to create awareness of ME. 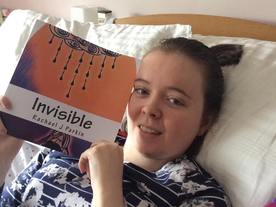 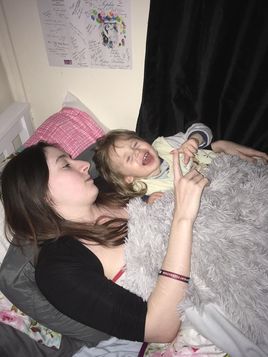 Sophie lives near Liverpool and suffers with severe ME. She is bed-bound most of the time and her hypersensitivity to sound, light and touch means that she is only able to spend very short amounts of time with her toddler Lucas. Something that would be heartbreaking for any parent.
She has to wear dark glasses and earplugs and finds it difficult to move her body at all, but unfortunately (like many ME patients) some people failed to understand her condition and just saw her as 'lazy!'

A true inspiration, Sophie did not give up but became an advocate for others with the same debilitating condition. This complicated disease is reported to affect around a quarter of a million people in the UK, ranging from mild to extremely debilitating.

The BBC have made a documentary about Sophie called "M.E and me" (although the title may change.) It is currently due to be aired on May 8th 2018 and broadcast on BBC 3, as well as being available on BBC iPlayer for up to a year after the release date.

Sophie comments, "Please watch it and ‘take in’ just how badly this affects millions of lives with a disease that can and is killing its sufferer! Take in the many (too many) people that are being abused and mistreated by the hands of friends / family and even doctors and professionals just for being ‘sick.’  Those who are being left to suffer and die for decades, have zero quality of life at all when severely affected by this disaster called Myalgic Encephalomyelitis! Let’s bring an all time awareness in our power of the disease nicknamed ‘The Living Death!’ Let’s bring hope and peace to us all for this disease has 'the biggest medical scandal of the 21st century!'"

I have been lucky enough to speak to Sophie via messenger and tell her that she should be proud of the work she has done and that her little boy will be super proud of his wonderful mum! Sophie and I can only have very short conversations on messenger due to ME induced migraines, sensitivities, fatigue and muscle/bone pain making it difficult to type and click. However, I hope we will battle through and keep in touch as we journey through life with this challenging condition. 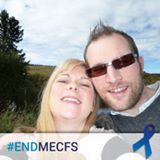 Michelle & Nigel are from the UK but now live in France. Michelle is another person who is affected by ME but yet another who is not letting it beat her! I came across their project 'Music4ME' on Facebook and was instantly drawn to their enthusiasm and creativity. Although ME is not something I would wish on my worst enemy, one good thing that has come from it is that I have met all of these truly inspirational people. I have dedicated a whole page to their 'Music4ME' project so please take a look!

"I am Michelle Henshaw and have had M.E. for 26 years now, since I was 22.  It began after a throat infection and I never recovered.  My husband Nigel and I moved to France 10 years ago hoping it would help my health but unfortunately I have continued to deteriorate and am now mainly housebound.  I am sadly not musical but I have built the website.  I have never done such a thing before so please don’t expect perfection, although I always strive for it!!!!
Nigel is my truly wonderful husband of almost 23 years, and he is my carer.  He has a UK Accountancy firm but mainly works from home, with occasional trips back to the UK to meet with clients.  He also makes as much music as he can, and performs his songs whenever he gets the opportunity!  Due to the fact that Nigel has a typical accountant's name he often uses his middle name Wyn for his music projects.  I am not completely convinced it is much more rock and roll than Nigel, but I have never met an accountant with that name!  He is no stranger to fundraising for M.E. awareness and charities.  Three years ago he embarked on his 23forME fundraising goal as I had been ill for 23 years at that point.  His goal was to run 23km a week for 23 weeks.  As part of that he also ran a half marathon in the UK.  He raised £2500! " https://www.southportvisiter.co.uk/news/southport-news/husbands-love-wife-inspires-him-9245178
Powered by